We were recently asked to write a piece about East London and its street art for the awesome Freestyle Magazine. Here's what we wrote:


East London’s street art scene is an incredibly dynamic and ever changing entity – much the same as the area in which it thrives.

As with other places around the world, the street art scene here started out as a way for outsiders and non-conformist artists to express themselves in the public domain without feeling the need for anyone’s approval and showing a complete disregard for other people’s judgement. In doing so they discovered a unique platform to engage with an audience - whether that unsuspecting audience wanted to be engaged with or not.

Ironically, at the same time that traditional letter style graffiti was reaching new heights artistically and being exploited commercially, it was causing increasing discomfort with the authorities and becoming ever more frowned upon by the general public. With late night security being implemented in railway stations and CCTV cameras appearing just about everywhere, writers were afforded less time to paint and this inevitably resulted in more and more arrests and prosecutions.

During the early nineties people looked for new ways to work and stencils and paste ups fast became the new mediums of choice. These methods allowed artists to do the lion’s share of the work at home or in their studio before executing the final piece onto the streets in a matter of minutes – even seconds. Street art exploded.

The styles and artists at this point still however had many similarities to the spray paint art that preceded it; artists painting freehand characters, like the Burning Candy Crew, wanted to ‘get up’ in unreachable and unprecedented spots – taking back space which they felt was rightfully theirs. They challenged ideals and made their own rules. Political statements and satire was rife with leftist and anti-capitalist overtones within the new street art movement. There was a feeling of a new punk-style spirit emerging within the East End. People asked new questions of society like; ‘if an advertiser can put up a billboard, why can’t we paint a wall?

In the meantime the Shoreditch party and squatting scene was reaching its pinnacle. In the wake of Blitz bombings and unwanted, abandoned ex-industrial buildings, an outsider’s playground resided by a new creative community had emerged. People could go out all night without a plan, without knowing where they were going or where they’d end up but having some undefinable feeling that in some way it was theirs. They belonged to it - and it belonged to them. Hangouts like the (old) Dragon Bar were rammed every Friday with people drinking, scoring and painting the walls and toilets. People scoped out abandoned spaces and made their own parties. There was a plethora of clubs, squats, legal and illegal parties on any given night all existing under the radar of the mainstream. The new street art movement and Shoreditch went perfectly hand in hand.

Shoreditch inevitably became popular, more bars and restaurants began popping up – as did their prices. This inevitably had a detrimental effect on the creative scene and prices began to push out the people that had created it. People flocked to a cool new place, and bit by bit began to tame it and shape it into something more manageable for the mainstream. From the authority’s point of view, like any counter culture movement things couldn’t be contained so they became controlled.

At the same time street art began to feature on people’s radars. The quality of the art grew to new levels, which in turn made it more accessible to the masses. Like skateboarding, breakdancing or playing the guitar, people took up street art because it was cool. Galleries began selling street art, most were and still are artist run and started out because of their genuine love for it and desire to give artists a platform to reap the rewards they deserve. Others obviously had their own agenda, but either way this allowed street artists to travel the world to paint walls and use the gallery system as their financial vehicle. The floodgates had opened an in came some of the world’s best street artists to paint the walls of East London – and then the Tate Modern.

This explosion of art on walls and a new street art economy made those that were elected to represent the people of East London increasingly uncomfortable. To them this was happening in an area that needed extensive re-development, an area mapped out as the new silicon-valley but more importantly an extension of the financial district. If you’re going to build five new skyscrapers in three years, the people that are going to work in them need somewhere to live. East London found itself in unique position due to its geography. Anywhere else, this creative district would be celebrated, but not when it’s in the way of a new real estate goldmine.

The area has recently done well to adapt to becoming the ‘tech city’ during the week and a mini Essex on a Friday and Saturday night. People have always moved in and out of this area; from the Huguenots in the 1650’s to the Jews and The Bengalis - it’s always been transient. The danger this time is that it is under a greater threat from greedy developers that are on the verge of changing it forever and the latest arrivals are too ignorant or just don’t care enough to do anything about it.

East London’s street art scene has now seen a permission culture emerge which has completely adapted the street art landscape and this works in two ways. Firstly: it gives an artist the opportunity to spend time and effort on a piece of work without the threat of prosecution, so the level of art is at times, staggering. Secondly: we now have ‘gate keepers’, who are trying to make a quick buck out of the scene and feel they have the right to curate the streets like it’s their own private gallery. We then lose political statements at a time when we need them most and artists sell to the highest bidder. It’s no longer street art, merely pretty pictures on walls. Artists repair their pieces like they own them, when the whole point of street art is to be ephemeral – tags are just as important as those staggering murals, people need to understand the scene as a whole before they get involved.

I’ve been lucky enough to spend time with and work with some of the best street artists in the world. When my favourite artists say they’ll never do a commission because they don’t want to be told what to do and keep their work cheap for the masses it gives me the highest level of respect for them. When I’m on a rooftop watching them paint illegally with the skyscrapers bearing down on us I know who they’re doing it for – themselves, the community. At heart they are outsiders and non-conformist artists out to express themselves in the public domain without feeling the need for anyone’s approval and showing a complete disregard for other people’s judgement.

A world renowned street artist once said to me ‘street art is a bit like punk music, it’s for anyone that wants it and everyone that doesn’t – you don’t have to be a virtuoso to create it or an expert to appreciate it’. Band wagon jumpers will come and go but as long as there are artists with attitudes like this, the street art scene will be safe.

As for Shoreditch, who knows? But as long as we still have projects like Red Market and others giving us an alternative playground, people painting walls and still feeling like we belong to it and it belongs to us, we’ve got a chance.

News From Our H.Q

There's been a lot of painting going on around the Alternative London H.Q
over the last few weeks. Here's a little update of some of our highlights.

Fintan Magee was over from Sydney and looking to hit some big walls in London. The Red Gallery wall where we are based is the largest street art wall in the capital and we were more than happy to help him fund his project as it hadn't seen a fresh lick of paint since Jo Peel's animation back in March (featured in previous posts). 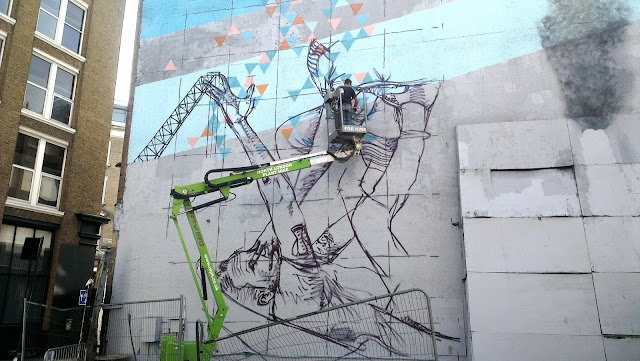 The view from above - this is one seriously high wall. 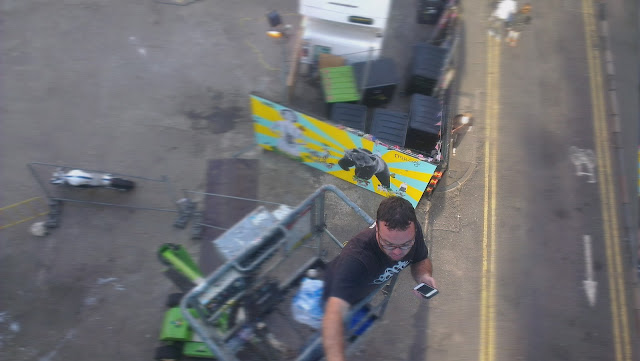 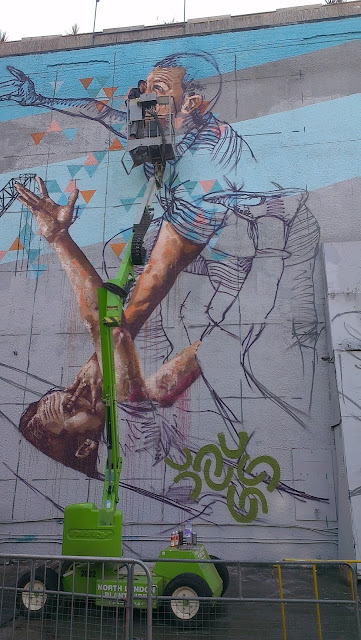 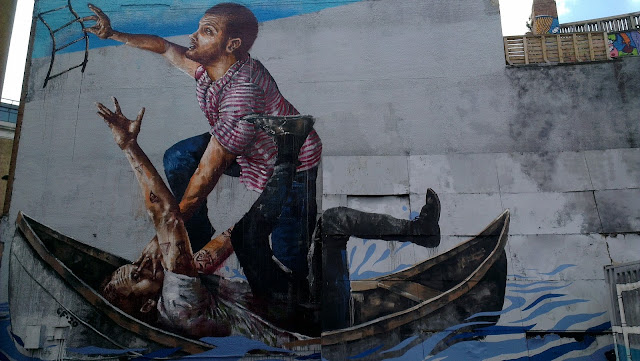 In the meantime three Brazilians were getting to work in the shape of the amazing Magrella, Alex Senna and one of our all time favourites, Cranio! 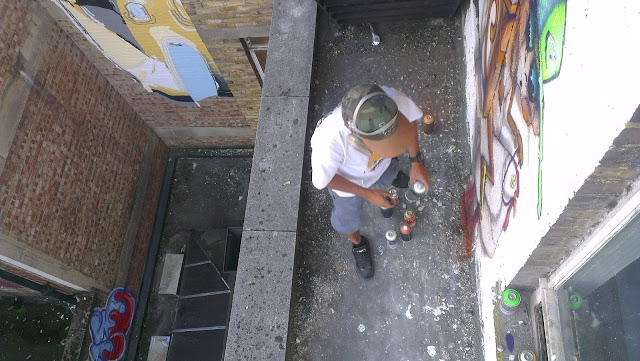 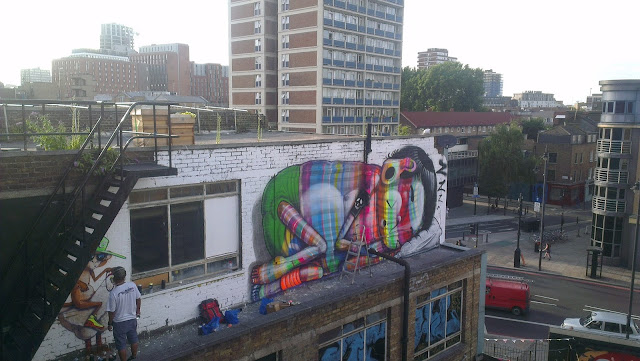 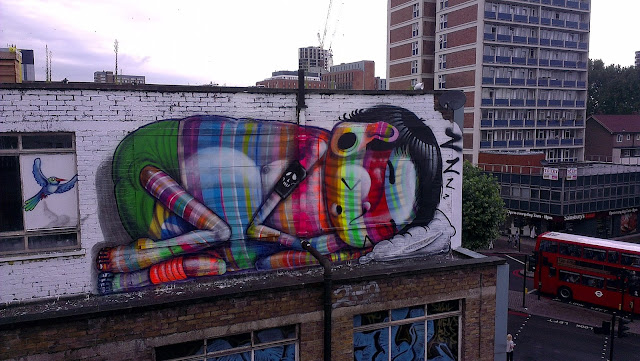 Magrella hit the high spot but half way through the piece ran out of time with the lift hire! Unbelievably she managed to scale the 25ft wall on a ladder to get the piece finished. Unfortunately we weren't there to witness the final extremely dedicated act, but here's the finished piece. 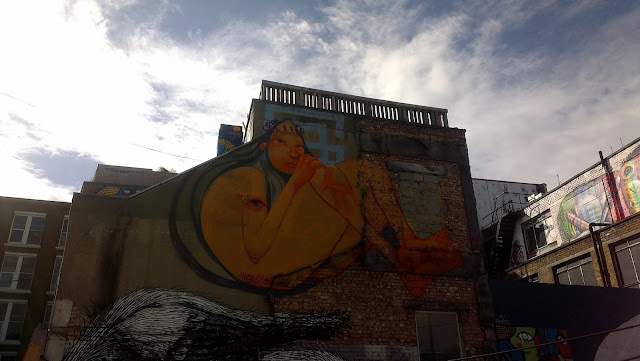 Alex created this beautiful monochrome piece out the front, one of many on his London visit. 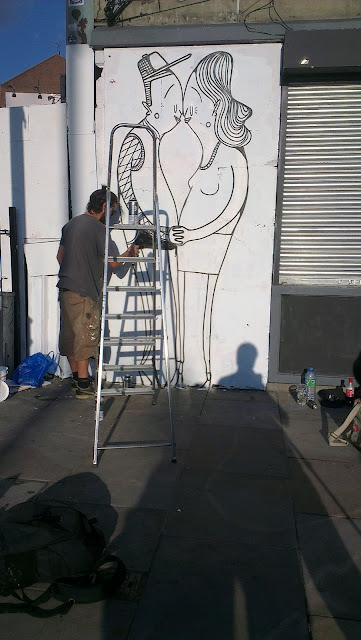 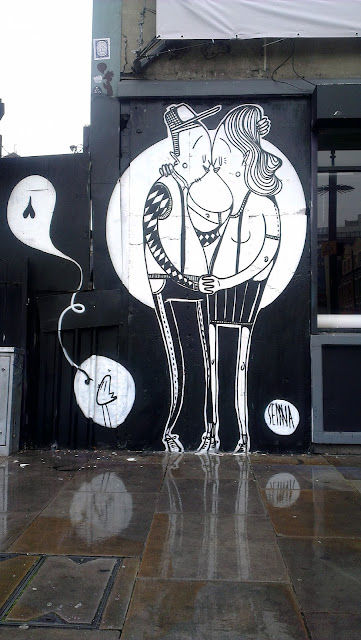 And last but not least, Hin showed up to give our stairs a much needed makeover. This is a trick one to photograph and really has to be seen in person to be truly appreciated. And while you're here you can check out one of his unique painted spray cans exclusively for sale from Alternative London. 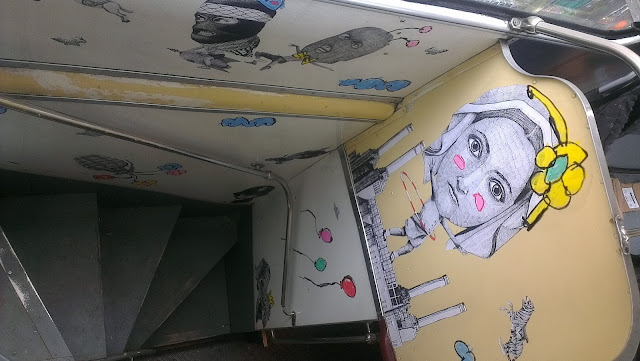